Rules of the game¶

Approximated time for a complete game of 10 turns with one kind of money. As it is recommended to play at least two kind of money (here debt money and libre money are described) to compare each, reserve at least 3h00 for a complete game + necessary time to expose reports given by the spreadsheet files. By experience, it is better to play all in one day, with one money the morning and the other in the afternoon, ending with the reports.

For N players, plan at least 5*N in cards (= at least 5/4*N four cards combo) per level. Plan at least 2*N for each banknotes color.

Value cards simulate exchangeable economical values, they are made of 4 decks of different cards easily distinguishable, impersonating one level each. Each deck contains 13 series of four identical cards, so at least 52 cards with 13 “four in a row”.

The four value levels are the grouped standard signs of each of the card decks.

We achieve series of four identical cards of the same signs as 4 five of hearts or 4 jacks of hearts.

“Revolution” style reflect the industrial revolution in the 19th century.

The four levels of values are drawings expressing in order:

Back of cards with the four levels

Values are depicted by letters from A to M. This is to ease the exchanges. 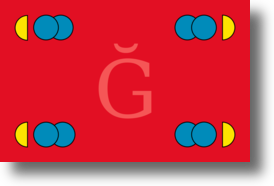 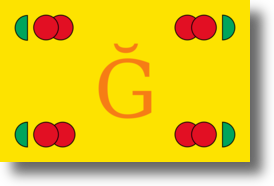 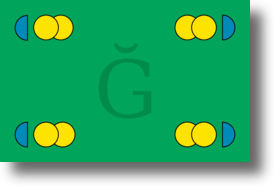 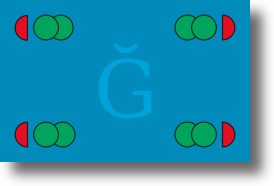 Value markers allow players to know, each turn, which value is the highest and the order of values.

The highest value in play is in the square at the right.

As soon as a player has achieve a suit of four identical letters of the highest value (square at the right), he receives the “pending” color. We shift the values one square left, following the arrows. The marker in the central square (“pending”) is moved in the square at the right, and the marker in the square at the left is moved in the “pending” square. All the lowest cards in play goes “pending” and are discarded by the players, put in the corresponding pile and replaced one by one by the new lowest value (we must ensure that there is a leverage of 4 cards of lowest value by player, which is the minimum to exchange properly).

To print banknote markers, you need to print an additional banknote sheet or use banknotes illustrating the chapter Banknotes of the money.

On a table accessible to all players, the organizer set the two help sheets and there markers. On the first sheet, he puts the value markers in the square and from left to right: food, culture, energy and the “pending” value: technology. 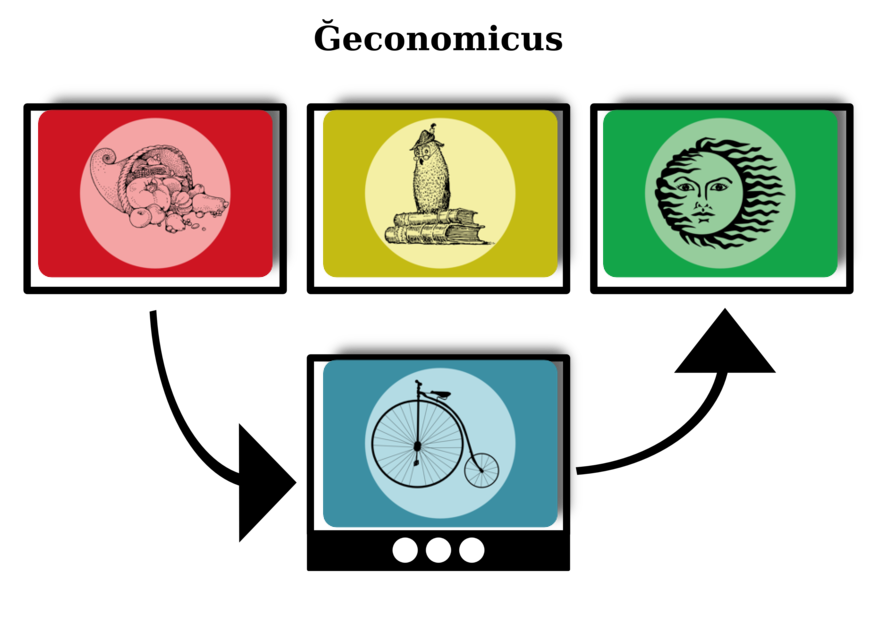 On the second sheet, he puts the 4 banknote markers in the square. From left to right: red, yellow, green and the “pending” banknote: the blue. 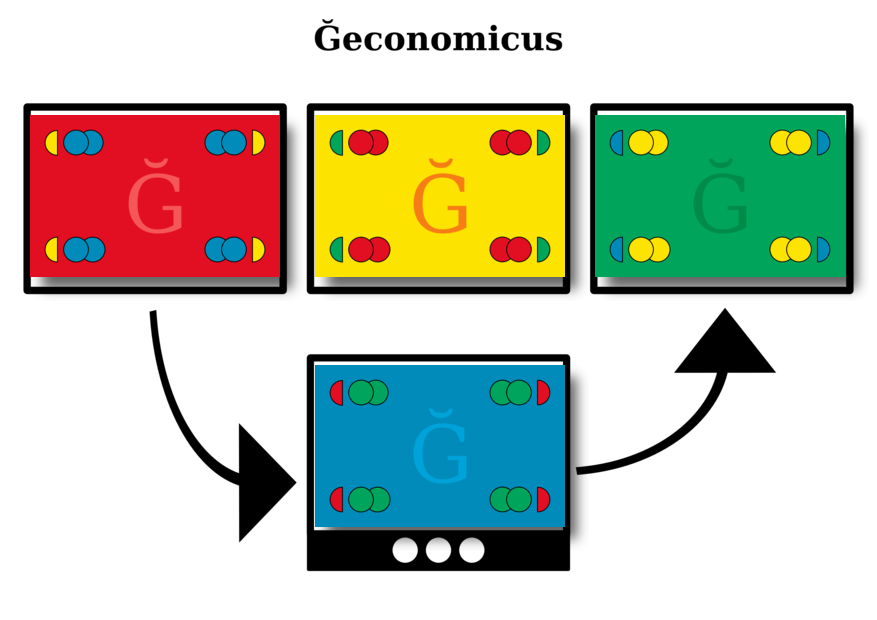 He shuffles the card deck of the lowest value (food) and spreads the cards face-down on the table. He asks players to take 4 cards each randomly. Those cards depict economical starting values possessed by players. He also prepares two piles spread on the table with the other two deck of values in play (culture and energy).

Goal of the game¶

The goal of the game is to create as much economical values as possible. In order to do that, each player, must buy and sell cards of the same deck, to get a suit of four identical cards. For each suit achieved, the player get a card from the superior value (see the value help sheet).

He take a card of the superior value, discard his suit of four in the pile of the corresponding deck and pick four new cards of the same deck. Doing so, if his hand was a four of “food” cards, it contains now five cards : four new “food” + one “culture”.

With the rolling cycle of the values, medium values equals to 2 low values and high values equals 2 medium ones. When a player achieves to get a four of high values he creates a “technological breakdown” (or economical), the pending value comes into play immediately at this time. It’s the old medium value which become the new low value and we shift to the new technological (or economical) level. The old low values will be withdraw from the game and becomes the new “pending” value. We do like this: each player replace one old low card by a card of the new low value.

The organizer must now explain to the players the rules of the money being played.

It is possible to play barter economy, without money, exchanging a card against another, but experience shows that this system will be stuck quickly and does not hold 80 years... However it’s up to you to test it and to compare with the other money systems !

Progress of the game¶

The game is a sequence of 10 timed turns of five minutes each. We can reduce to three minutes if we need to accelerate the game. Each turn depicts 8 years. At the end of a game, each player has been living 80 years of play, which is the average lifespan in Europe.

The organizer split players in ten classes of age spread among the ten turns. At each turn the one or more player of the age class die and come back in the game as a new born child.

With 20 players, 2 players die each turn. With 15 players, one or two players die depending on the split done on the ten turns. Only the organizer knows in advance the name of the dead ones of each turn. The order of the death is determined at the beginning of the game in the spreadsheet software and is secret.

Each turn, the organizer announce the beginning of the turn and start the timer. Players can sell and buy value cards with banknotes of the current money system. At the end of the turn, exchanges must stop immediately. Yet, people with a suit of four before the end of the timer can exchange it and get a superior value card.

At the end of each turn, the organizer calls the players taken by the death. This one or those ones go to see the organizer in private, in order for him to record values and banknotes possessed by the player.

The score is recorded in the spreadsheet software dedicated to it. In this spreadsheet, we keep track on each turn of the “TECH” column allowing to know which level of low value we are in and which is a multiplicative factor (depending on the level, it is evaluate to 1, 2, 4, 8 ...).

Player is invited to get back in the game as a new born. He gives all the value cards in the piles, then takes 4 new cards of the low value and receives banknotes as it is defined for the new born in the current money system.

Ğeconomicus focus on the cumulated production of each player depending on the money system. Add complex rules to the game will not achieve the goal of this game, which is not to study a economical simulation without purpose, but to compare precisely how the code of the money used will influence the result. Some new rules added will only confuse the cause we are studying.

End of the game¶

At the end of the last turn, all players are called one by one by the organizer. He records the values and banknotes possessed by players and add it in the spreadsheet software.

The spreadsheet display then a complete histogram, allowing to make an assessment on the monetary system just been played. The comparison of histograms among the few monetary systems played will awake players to the causality we are studying.

A game of Ğeconomicus is complete only if the organizer publish a detailed report (post on a blog or social network, video, slide-show, on his own website or another place), with the help of the spreadsheet software and generated graphics fed directly during the game by the banker on one side, and by the organizer on the other side.

One should display at least in graphics for each money played:

The banker in the “debt money” is really another player (played by an organizer, but not always). It can be interesting to show a histogram “without the banker” then “with the banker”, it is just a way to awake people (rather interesting) but comparison among moneys must include all players or it will not be correct.

For this you can use (or improve) the LibreOffice spreadsheet files of Ğeconomicus: